Hi!
I write stuff. And here, I mostly write about writing stuff and about writing-related issues. I've been posting poems, lately, and am likely to keep doing so.

I'd also love it to pieces if you tell me a bit about yourself, if I'm unlikely to know you from your lj name (my lj powers are weak). At some point when I'm finding it a bit less overwhelming, I'll be friending people back; I just haven't the focus to figure it all out just now.

I think that's everything for now :)

* ETA: Though, please read this before deciding if you want to friend me, because I am not necessarily going to make you comfortable, and I am entirely out of patience with so-called allies who only want validation & cookies.

rose_lemberg at Stone Telling 12: JOKE!
It's April 1st and, for the first time in the history of Stone Telling, we've published a JOKE issue:

Just so you know,
we thought about it long and slow,
and decided, without further ado,
that, going forward, ST only rhymed poetry will do.

To that end, we've published our first rhymed offering,
an issue so full of awesome
it's somewhat troublesome.

Of course, it all could be a ploy
to bring you more hippopotamoi.

As promised, this is our mermaidiest issue to date!

Special thanks to Stone Telling patrons and An Alphabet of Embers backers for making this silliness possible. Please consider supporting us on Patreon :) 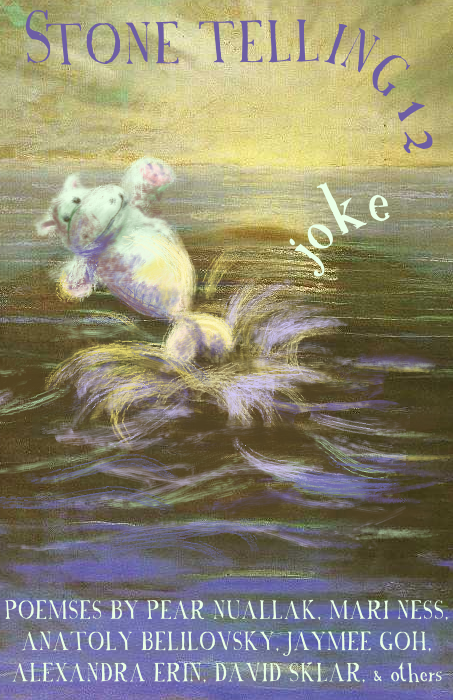 (2) Well, you may well need a tissue
for the contents of this issue
but for not-the-usual reason -
just the poems over-pleasin'! 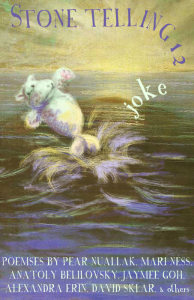 aliseadae)
Susannah Mandel, To The Family In The Sycamore Across The Street
Emily Jiang, Ballerina Hippo Mippo (

fantasyecho)
Kathy Figueroa, A Snippet of a Tale
Alexandra Erin, The Spoon-Drawer Gnome (

Someone on boingboing pointed out that college-educated should be in that list. They are absolutely right. I missed it because we are often unaware of the ways in which we match the prototype. The default is unmarked.

Someone on metafilter claimed that I'm falling into my own categorical trap, which I think means projecting my own experience, when I say that Americans are prototypical, since they are a tiny percentage of the global population.  If I interpreted them right then this is wrong, for a few reasons.

1) I'm an Indian national. And, yes I live in the US now, but I didn't when I wrote the post. And I've lived in a lot of countries; US-centrism is a phenomenon I've encountered in all of them. (Consider the impact of white Americans getting killed. The whole world is expected to care. It's just not true for anyone else - unless it plays conveniently into existing bigotries/narratives of course.)

2) Percentage is irrelevant. Americans' position (in the absence of other context) as global prototype human has to do with their global power and prestige, and their extremely effective imperialism.

Having said all that - prototypes absolutely do vary between people & communities, based on experience; and relevant categories and thus prototypes do absolutely shift with context. Take all generalizations as exactly that.

Apparently my post here has recently turned up on Making Light, BoingBoing, and Metafilter.

(Which of course makes me wish I'd written it better! And as one commenter on BoingBoing TOTALLY correctly points out, I left out college-educated in my listing of what makes the prototype. Which is not a coincidence at all; we tend not to think about the ways in which we ourselves are prototypical/default.)

But it also means I'm filtering non-friend comments now. Because we get gems like this: [edit to add: so far this is the only one. It's just of a type I've seen frequently elsewhere.]

"As a non-academic cis white male of 54 who knows he's benefitted from this subconscious categorical thinking but who - I SWEAR - has always been a skinny long-haired "weirdo" not accepted by authority figures and who has followed closely the work and books by Boroditsky, Lakoff, and Feldman, I read this and sigh: what can I possibly say, except I AM A FUCKING ASSHOLE whose made everyone's live worse by being who I look like?

To which I replied:
White people in North America live in a social environment that protects and insulates them from race-based stress. This insulated environment of racial protection builds white expectations for racial comfort while at the same time lowering the ability to tolerate racial stress, leading to what I refer to as White Fragility. White Fragility is a state in which even a minimum amount of racial stress becomes intolerable, triggering a range of defensive moves. These moves include the outward display of emotions such as anger, fear, and guilt, and behaviors such as argumentation, silence, and leaving the stress-inducing situation. These behaviors, in turn, function to reinstate white racial equilibrium. This paper explicates the dynamics of White Fragility. - Robin DiAngelo

I did not bother noting on the comment that this sort of defensive response is a form of oppressive behavior - an attempt to silence the speaker of unpalatable things. But I will note it here, as a thing not to do.

I won't be unfiltering any other such comments; this one can stand in as a token for the lot. If I get too many for my spoon level, I'll just close comments. But I would prefer not to be silenced - and to have worthwhile conversations in comments silenced - by oppressive behaviors. I realized I never posted my drawing of our noble friend the mippo to lj.

buddhistmippo is an excellent model; stays still and his smile never looks forced. He's the first drawing from life I've done in over a decade, how did that happen?

Pixel art, done in the GIMP with wacom tablet/stylus

Yes, this coming monday. We got the confirmation on Friday.

It's a major squee, of course. But guess which household resembles a distraught henhouse right now?

(btw this is why Stone Telling will be Delayed.)
Collapse